Muna was born to a poor family. With an alcoholic father, she usually experienced beating, along with her mother and seven other sisters. As she grew, her physical features resembled that of a man, causing her family and friends to hate her.

One day, her father sent her to Kathmandu with his neighbour’s brother to earn money. She was employed at a hotel as a dish cleaner. However, as the days passed, the hotel owner started forcing her to be a sex worker. She refused and tried to run away but did not succeed. She eventually learned that she was sold by her own father. Heartbroken and desperate to survive, she felt she had no choice but to endure being a sex worker. She suffered a lot while satisfying the customers. Many times she tried to run away from but with no luck. 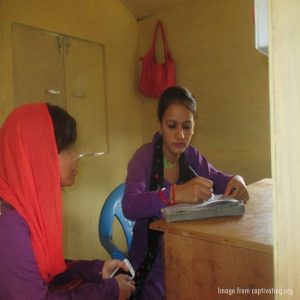 Muna was found in a major bus station by a 3 Angels Nepal Team. She shared that she was about to meet a customer with whom she’ll be living with. After a long conversation, she eventually opened up and shared the miseries she went through. The team explained to her the effects of working in the commercial sex industry and the disease she would probably suffer from due to the work she was engaged in.

Learning more about human trafficking and its effects, she expressed her desire to leave that work and start a new life, and that she wanted to live in society with pride. The team explained that they can assist her in reporting any harassment to the police, and that there are other forms of help available if she wanted it to help her move on, make good choices, and rebuild her life.

You can join us in rescuing and helping prevent more women and girls from becoming victims of human trafficking. Simply click below and make your donation.