Eight traffickers have been arrested so far this year because of the efforts of our amazing partners Tiny Hands Nepal and 3 Angels Nepal. Each trafficker that is arrested, means more women and girls could be prevented from being trafficked. This is dangerous work but it is important in the fight against trafficking. Our partners have a close working relationship with local police and authorities and they all work together to intercept and rescue girls from trafficking as well as track down and arrest traffickers, just like in Hira’s case below.

Hira’s (name changed) family was poor so her parents married her at the age of 15. After two years, she had two children. When her husband stopped working, she began to face problems paying her children’s tuition. Her situation worsened when her husband became an alcoholic. She took her children to her parents’ house and left to work in Dubai through Nepali legal channels.

The money she earned overseas was sent to her parents who helped her build a house and send her children to school. After three years of working, she returned home. When she was ready to travel abroad to find work again, she met an agent who promised to send her to Oman for a high-paying job. This time, however, the agent instructed that she had to go through India, which is an unsafe and illegal way to travel abroad. Since the agent had promised to send her for free, she did not hesitate to go through India. 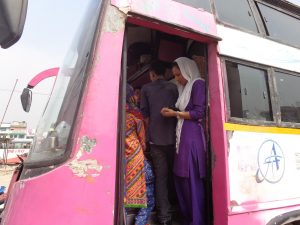 While our partners at the border were doing their routine checking of the buses travelling to India, they found three women in the bus all having the same story – that they were going to New Delhi International Airport. This information was enough for the staff to be sure of their vulnerability. When Hira showed the picture of the man whom she claimed to be her brother, and who organised the job and transport, the police quickly recognised that the person had been involved in several crimes earlier.

The police did not permit the three women to cross the border. Their relatives were called and after explaining their sure chance of being trafficked, none of them were willing to go to New Delhi. The man in Hira’s picture was discovered to have ran away from the village and is now on the police search list.

You can join us in helping prevent more women and girls from becoming victims of human trafficking. Simply click below and make your donation.