In 2019, staff members from our partner, Tiny Hands Nepal / Love Justice International, intercepted four women at the Indo/Nepal border because their situation looked suspicious. During the interview process, it became evident that one of the women could be the trafficker. The other women were encouraged to file a case against their trafficker but they were reluctant to do so. Because of the staff suspicions, the women were not allowed to cross the border. They were sent home. It was later found out that the suspicious woman threatened the others that she wouldn’t return their money and that they will be sent back abroad again. 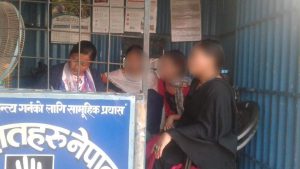 Just a week after they were first intercepted, the three women, along with several others, were again on board on motorcycles to cross the border to India. When they reached India, they were forced to stay in an unknown place and were not fed properly. That was when one of the previously intercepted women finally confirmed that the woman who threatened them before was indeed a trafficker.

Thankfully, one of them remembered the counseling she had received from our partner staff. She called their trafficker and demanded that they be released. Otherwise, they would report her and file a case against her. The trafficker agreed to let them go and two of the women immediately returned to Nepal. Upon their arrival, the two women sought the assistance of Tiny Hands Nepal to take legal actions against their perpetrator.

A Tiny Hands/Love Justice investigation team helped the women file a case and through coordination with the police, the case progressed until two traffickers were arrested and sentenced to prison for two and a half years. They were also required to pay Rs. 25,000 [US$200] to the victims as penalty. Later on, two more traffickers were arrested and sentenced to two years in prison and required to pay the same amount to the victims.

Thank you to all the staff across the Nepal border and all our partners who continue supporting this effort of intercepting women at risk of human trafficking.