During the interview, after she realized she was being sold, she revealed the pimp’s name and a suspected pimp from an outcast village who was transporting her to India. She also stated he had molested her time and time again. She was kept at our transit home and was provided with necessary counselling. The pimp called the office, stating he was her father. 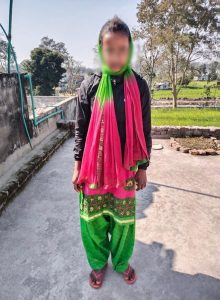 But after coordination with the local police, it was revealed she had been missing for the past three months and her mother had filed a missing person’s report. After investigation, two pimps were arrested and our team helped to file a case against them. For safety and security, she was sent to the Women Safe Haven and is preparing for an exam to be able to continue her education.

Your support of USD 100 will fund the interception of a person at the border. If you are a company or an organization, for USD 8,500 you could fund an entire monitoring station for a year. Click on the links below to know more.