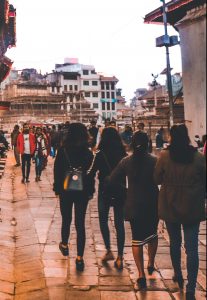 Twelve Nepali girls were being trafficked to India with false promise of jobs. When all of these girls were intercepted and investigated about their travel plans, it was found that they were all tricked for fake job offers. They were falsely told that they would be performing dances in events and programs of rich people in India for which they would be receiving money. They were told they would be earning Rs.2,000 (USD 17) per day.

After the COVID-19 crisis and the pandemic, many families have been facing economic challenges. The trafficker used fake job offers to lure these young girls. In coordination with local police, five girls were intercepted before they crossed the border, while seven of them were rescued from the Indian side of the Indo-Nepal border.

It was found that until a certain location, they were travelling in groups of 12. After reaching one of the nearest cities from the Nepal-India border, they were divided into groups.

The girls have been reunited with their families after a court case has been filed against the trafficker.

Your support of USD 100 will fund the interception of a girl. If you are a company or an organization, for USD 8,500 you could fund an entire monitoring station for a year. Click on the links below to know more.