Maya (name changed for protection and privacy) is 23 and works in a hotel as a cleaner. Things were going good for her and she was happy in life until one day when her cousin and his friends came to her hotel for lunch.

After serving them food, she sat beside her cousin to talk with him as it had been a long time since they had seen each other. While eating and talking with them, she felt a hand hovering on top of her thigh. It was her cousin’s friend. At first, she thought that it was by mistake but she felt it again. She got angry and confronted him but she was scolded down. She was pointed towards the private room. She got scared and immediately called her mother and sister-in-law. But the man started abusing her mother and sister-in-law as well. 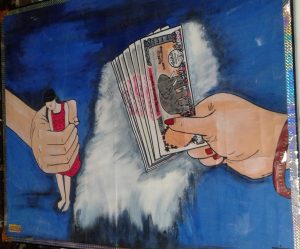 A painting made by a woman rescued from trafficking

Seeing that things were turning from bad to worse, she quickly called the nearest police office. The inspector on duty referred the case to the 3 Angels Nepal (3AN) team who then came to the hotel and listened to the story surrounding the situation. They learned that her cousin had taken money from his friend to arrange Maya for his pleasure. Fortunately, Maya was brave and alert enough to know that something wrong was happening and was able to immediately call for help, protecting her and her loved ones from an outcome that would have changed their lives.

A complaint was filed against the man which lead to his arrest. Maya was given counseling regarding human trafficking. The staff explained to her that girls working in hotels often become victims of trafficking and cannot usually escape the hold of their employers.

Maya is grateful for the help she received and the warning and information about trafficking. She also knows who to call if she ever finds herself in a similar situation again.

Our partners also respond to emergency calls from women in dangerous situations, in addition to monitoring borders to prevent girls from being trafficked. Click on the links below to know more about how you can help keep these on-the-ground efforts running.