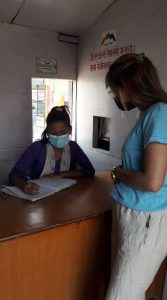 One of the villagers approached them and offered to help. He said that he can find a job for Tanuja in India while her mother works for him as a house helper. Tanuja was okay with the offer but her mother was not happy about it. It was a difficult decision but they had no other options available at that moment.

Her mother started working in the house as a cleaner. Meanwhile, Tanuja was told that she would be taken to New Delhi for a job in one of his friends’ hotels. The man took Tanuja in a car, but just before the Indo-Nepal border, Tanuja was asked to get out of the car and walk across the border into India.

Fortunately, our staff at the border intercepted her. She was found to be tricked. With the help of the police, both Tanuja and her mother were called. Her mother shared how she was tricked by her brother-in-law and forced out of their own house. Our partner 3 Angels Nepal and the local police helped them get the house back in their name. They were able to sell the house and pay the bank loan. They also used the remaining amount to start a small business for livelihood. Now both Tanuja and her mother are living together, while Tanuja continues higher education.

Your support of USD 100 will fund the interception of a girl. If you are a company or an organization, for USD 8,500 you could fund an entire monitoring station for a year. You may also join us this June 2021 in our global fundraising event – Stop Trafficking 5K. Click on the links below to know more.