The following story is written by freelance correspondent Zoe Osborne for the ABC News on February 23, 2019. It can be accessed on the ABC News site – Sold into sex slavery: The “Angels” rescuing Nepalese women  or the full article is below. 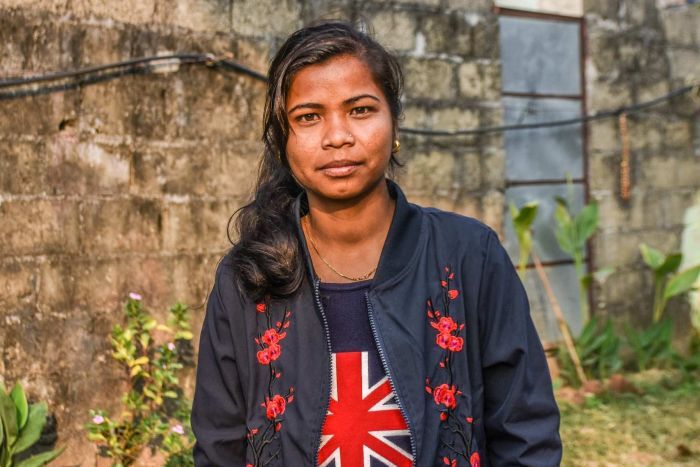 When border guards stopped her escape to India, Maheshwori Nepali was furious. “I felt very angry that they were holding me up and asking me so many questions,” she says. Born into one of Nepal’s lowest castes — the Dalits — she was seeking the promise of a better life over the border.

“In my village, we have very severe untouchability stigma,” she says. “We have no access to the higher castes … they do not even go to the well to get water if I’ve used it. “Also, there is no work for us.”

So when an older family friend offered to take her across the border to study in India at age 19, she jumped at the opportunity. “This man was known for so many years in my village. The whole family trusted this man,” Maheshwori says. But when she arrived at the checkpoint, suspicious guards stepped in and the plan was sprung.

“If they had not stopped me I would have gone,” she says. 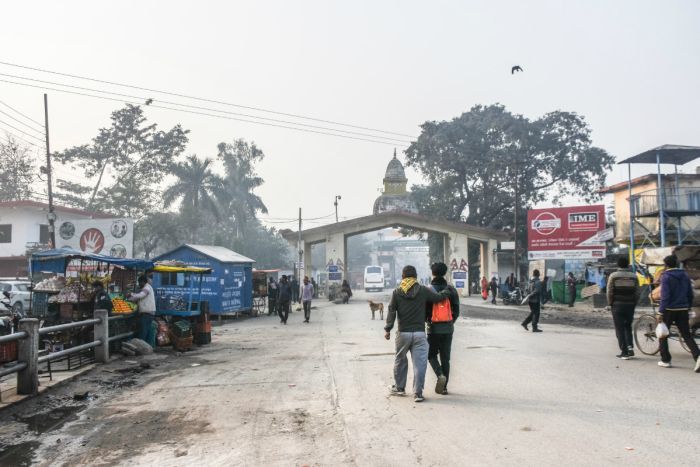 PHOTO – As many as 50 women and girls are trafficked into India from Nepal every day (ABC News: Zoe Osborne)

Little did Maheshwori know that her new life would begin right there — not as a trafficking victim, but as a border guard with the NGO 3 Angels, rescuing women in the same precarious position she was in.

As many as 50 women and girls are trafficked into India from Nepal every day. They are sold into the sex trade, circuses or massage parlours, used as human bombs or drug mules, or exploited for forced labour. In some cases, children are even stolen for use in human sacrifices. “There is a Hindu belief in India that if a huge construction needs to be built, it will require a human sacrifice,” 3 Angels co-founder Rajendra Gautam says. Others are trafficked for their body parts, organs, hormones or skin. “After the organs are taken out, most of the time they will either force the victim to go and beg … or just throw them onto the street,” he says. 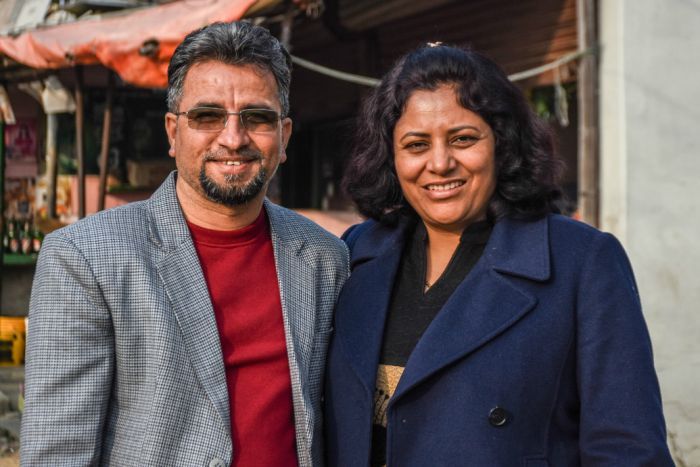 But the majority end up in Indian brothels where Nepalese girls are in demand, especially virgins with fair skin and Mongolian features. In India and some parts of Africa, a Nepalese virgin is widely believed to cure AIDS. About a quarter of Nepal lives under the international bread line, without access to basic facilities. When the Ghorka Earthquake struck in 2015, leaving 800,000 houses in ruins, life became even harder.

While caste discrimination is illegal, it is still widely practiced. Lower caste Nepalese like Maheshwori who can’t work are forced to find work in other countries. More than 30 per cent of Nepal’s GDP is money sent home by offshore workers. PHOTO – For many, leaving Nepal can mean the end of their life as they know it. (ABC NEWS: Zoe Osborne)

No passport or visa is required to enter India and the Indian caste system doesn’t discriminate against Nepalese people, so many simply travel south. All traffickers have to do is pose as employment agents and the victims traffic themselves.

‘That’s the end of their life’

Traffickers work in a network with varying levels of information. Trafficker A is a local from a remote village who is keeping tabs on the local women’s problems. “Some may have broken family, some may have a domestic violence issue, some may have drunken parents,” Rajendra explains. “He will be well aware of who is sitting where and then he will go to each person’s parents and say, ‘look you’re having this problem, it’s because of the money and I have a big job for your daughter’.” PHOTO – Many of the staff attending this workshop are victims of human trafficking. (ABC News: Zoe Osborne)

Trafficker A then hands 15 or so girls to Trafficker B for a small return.

Trafficker B, who’s based in a bigger city, will hold the 15 girls in captivity, usually in a motel.

This is where the big money comes in, because Trafficker B and Trafficker C, who’s stationed at the border, know where the girls are headed.

“Trafficker C hands over the big money and the girls are taken across the border to Trafficker D, who could be an agent representing a brothel from India,” Rajendra says.

“The girls are taken across and that’s the end of their life.” 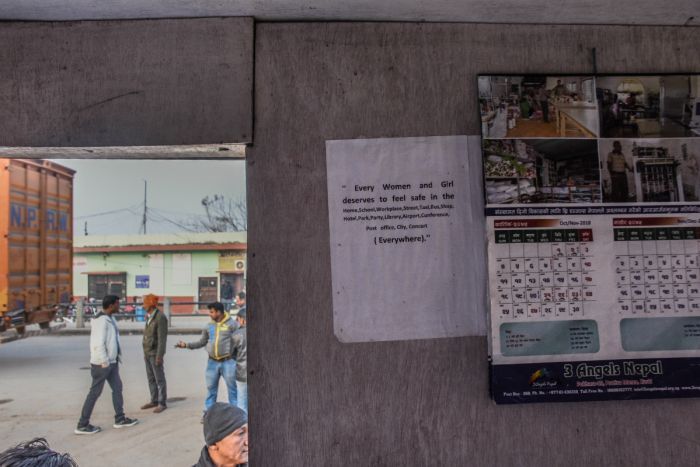 PHOTO – Inside the booth at the Sounali crossing on the Nepal-India border. (ABC NEWS: Zoe Osborne)

Now, from her job on the border, Maheshwori can see the danger she was in. Her “family friend” has disappeared, but she’s convinced she would have been trafficked, like the cases she intercepts every day. Often the traffickers fight back. One guard say he receives threatening phone calls and has been pelted by stones on the way to work. But the guards continue to intercept as many as 10 cases a day at each of the 14 checkpoints along the 1,758-kilometer border. 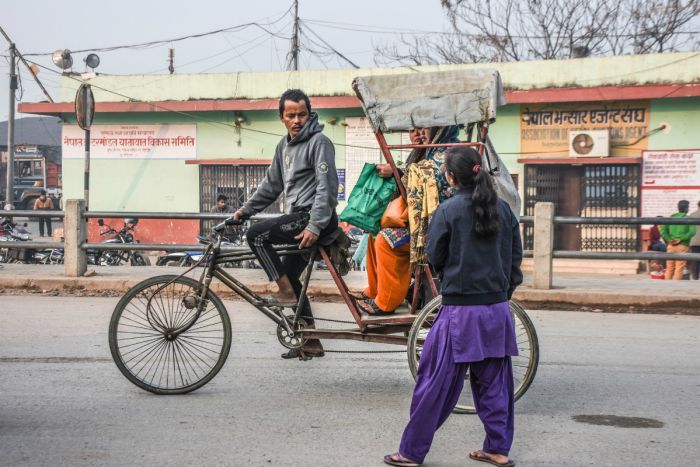 PHOTO – Maheshwori Nepali stops someone at the Nepal-India border to talk to them. (ABC News: Zoe Osborne)

“We look for the way people behave,” Maheshwori says. “Often if it’s someone who is doing wrong, their facial expression will change when they see us.”

But the border is almost impossible to monitor completely, with as many as 100,000 people passing through each checkpoint every day. If Maheshwori does intercept a potential trafficking case, confirming her suspicions can be difficult. It is very common for victims to lie about their situation, believing they are going to India for a great opportunity. Maheshwori recently intercepted five women on a bus who claimed to be going to India for work. Traffickers in Kathmandu had sent the girls to the border with strips of medicine and hired an escort to help them across the border — a common practice. “The escort was only told ‘please help them to buy more medicine in Delhi’,” Maheshwori says. Like the victims, the escorts are usually kept in the dark. 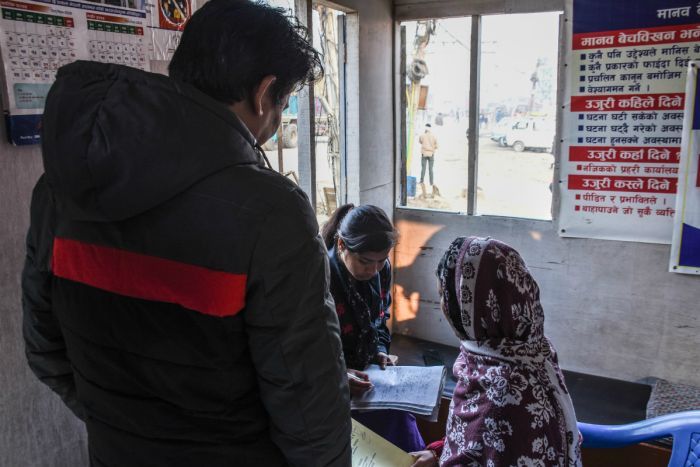 PHOTO: Maheshwori interviews a woman after stopping her at the border. (ABC News: Zoe Osborne) 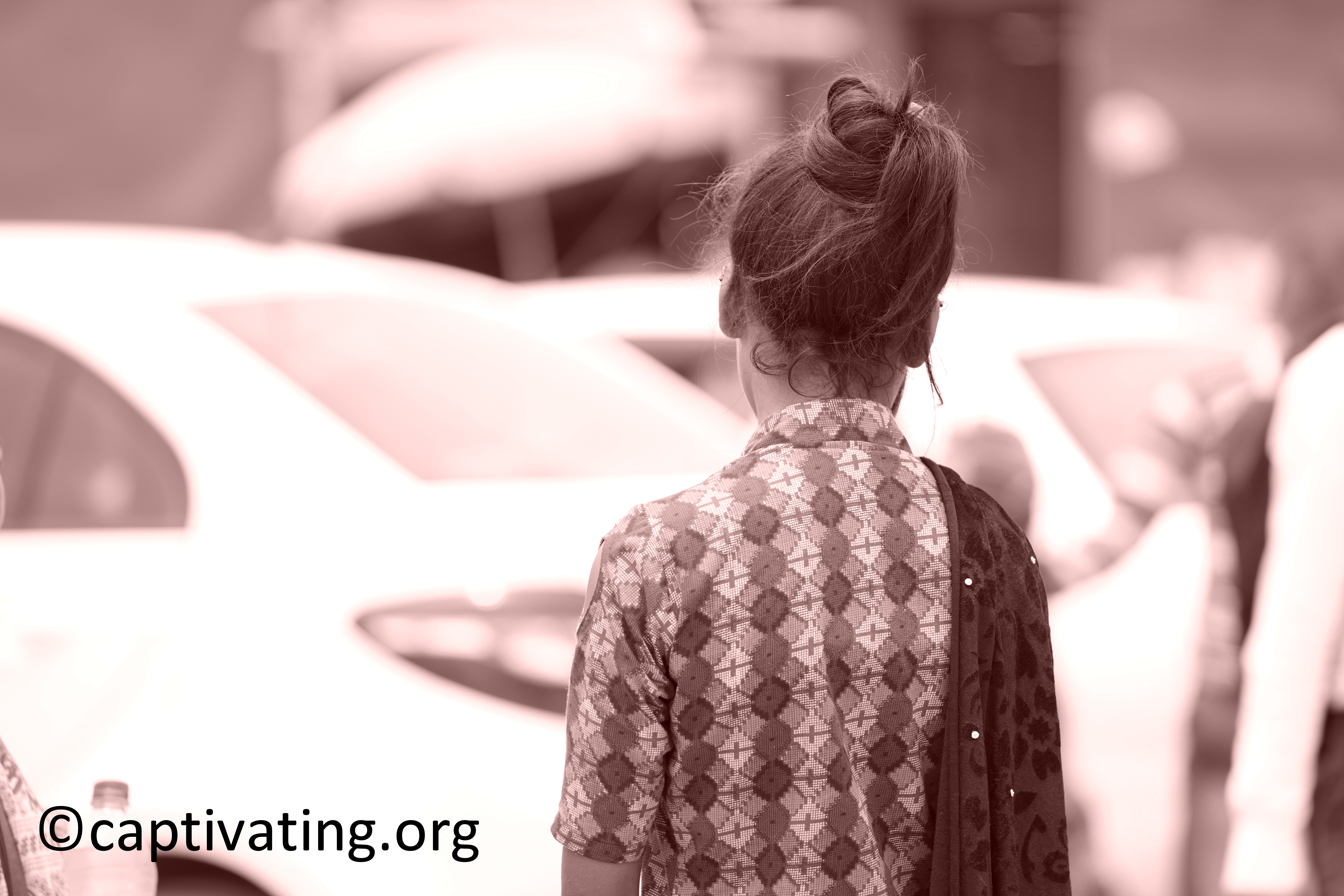